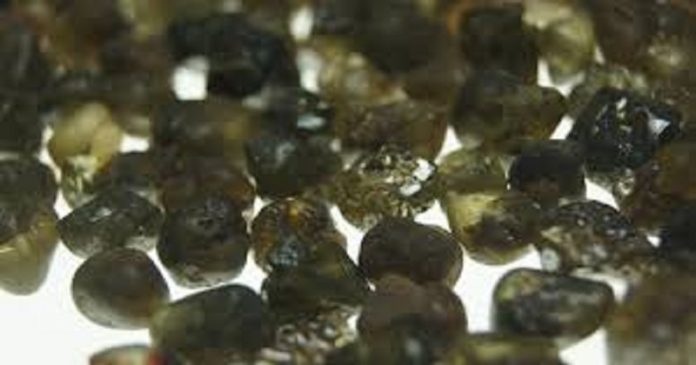 DIAMOND TIMES –Zimbabwe is allegedly selling all parcels of rough diamonds at its auctions to a single buyer amid concerns that some corrupt officials from the Zimbabwe Consolidated Diamond Company (ZCDC) and the Minerals Marketing Corporation of Zimbabwe (MMCZ) could be leaking the reserve price.
Business Times cited unnamed “well-placed” government and diamond sector sources who alleged that there was possible collusion, which allowed a Lebanese businessman Jamal Ahmed to enjoy a monopoly over the country’s diamonds.The newspaper alleged that some ZCDC evaluators and MMCZ marketers are leaking diamond prices to prospective buyers, eliminating competition at the diamond auctions.An internal investigation was said to have been launched at ZCDC.”This is a syndicate and there are strong internal indications that there is price collusion and someone is likely leaking prices to buyers and this has seen only one buyer outbidding others on every auction,” a source said.

Another source said the past auctions used to attract several buyers including those from Belgium but the latest situation had created disharmony among the buyers.Meanwhile, MMCZ general manager Tongai Muzenda professed ignorance saying he was yet to get reports on price collusion.ZCDC chief executive Mark Mabhudhu also said the collusion story was difficult to substantiate and they were inviting more buyers to participate in the diamond auctions.”The guy (Jamal Ahmed) supposedly winning the parcels is the guy offering the highest so I don’t understand where the collusion is coming in unless someone is giving them the reserve value,” he was quoted as saying.”The collusion story may be very difficult to substantiate. We are getting quite some competitive bids and whoever is claimed to be getting the most is likely going to have competition.”Ahmed was said to be unreachable for comment.