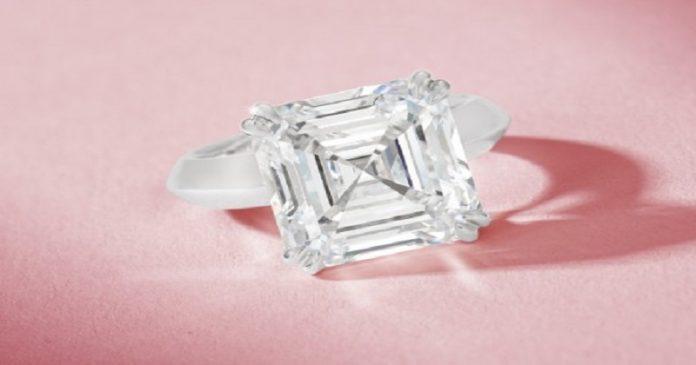 The top seller at Phillips’ Jewels and Jadeite auction in Hong Kong was a 10.59-carat diamond ring.

Phillips reported Sunday that the square emerald-cut, D-color, flawless diamond sold for $968,039, substantially over its estimate, during the June 5 auction. Another flawless diamond, an emerald-cut, 8.06-carat, D-color ring, was also a hit, selling for $568,449, much over its presale estimate. The auction raised $7 million in total.

Colored stones were also popular among buyers. $373,552 was raised for a ring set with an oval-shaped 5.74-carat Kashmir sapphire surrounded by marquise- and brilliant-cut diamonds. Sally Rider’s cushion-shaped 5.32-carat fancy-vivid-yellow VVS1-clarity diamond ring sold for the same price. Both of the prices were within their pre-sale forecasts.

Meanwhile, a signed Cartier ring with a circular-cut, 4-carat Burmese ruby surrounded in 3.70 carats of brilliant-cut diamonds sold for $341,069, above its estimated value. A Wreath bracelet designed by Harry Winston in 1980, with a total of 55 carats of diamonds, was another remarkable item. That piece, which was created in the shape of a leaf design with diamonds, brought in $308,587, which was in line with expectations.

However, a pair of pear-shaped fancy-blue diamond earrings weighing 1.12 and 1.13 carats, as well as a matching 2.21-carat blue diamond pendant that converts to a ring, failed to sell. Each was estimated to be worth up to $770,000. A pair of Harry Winston earrings with diamonds and emeralds that were estimated to cost up to $700,000 did not sell at the auction.

Graeme Thompson, Phillips’ global head of jewellery, remarked, “This season’s performance produced a 13 percent gain in value on the spring 2020 auction of Jewels and Jadeite.” “Collectors are more confident than ever in the intermediate market. D-color, flawless diamonds and high-quality colourful stones, such as rubies and Kashmir sapphires, were in high demand.”

Phillips sold 76 percent of the things on the auction block.