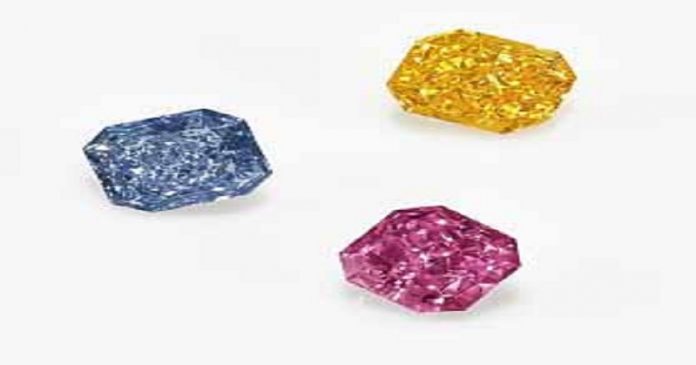 The auction was led by ‘The Perfect Palette,’ a trio of sensational colored diamonds being offered as separate lots, which collectively achieved $8,370,000

DIAMOND TIMES –  Christie’s New York April 13 auction of Magnificent Jewels achieves a total of $34,960,000 with 97% sold by value, 94% sold by value, and 132% hammer above low estimate. There was global participation with registered bidders from 40 countries across five continents.

Additionally, impressive prices were realized for significant white diamonds led by a pear brilliant-cut diamond ring of 38.04 carats, D color, flawless clarity, Type IIa that sold for $3,030,000; an emerald-cut diamond of 14.50 carats, D color, IF clarity, Type IIa that achieved double its low estimate selling for $1,410,000; an impressive diamond bracelet that realized $1,170,000; and a pair of diamond earrings offered at no reserve which achieved $894,000. Colored gemstones performed with exceptional results including an exquisite Burmese ruby ring by F.J. Cooper, a prominent Philadelphia jeweler that sold for $1,650,000; and a Colombian emerald ring by Cartier, which realized $225,000.